Here are a few final notes on Gardner Village, driving a tractor, a photo-tour of the ride, and the carriage trade in general: 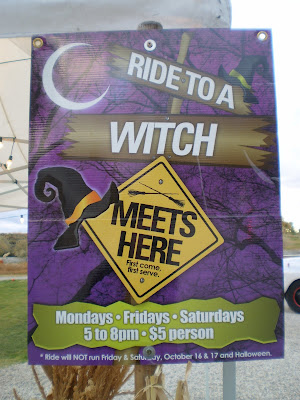 Pumpkins do not make good step stools. Wet pumpkins especially, and it you've ever seen a little boy, climbing on a wet pumpkin slip down and catch the stem in the 'nads, you'd understand.

On a hay ride, you get on the wagon and sit your ass down. You do not get back up after you're seated and wander around. It's a hay ride not a frickin dance floor. And you never allow you kids to jump off and run behind the ride, and then talk about the kid that was killed on a hay ride two months ago. Unless, of course, you're stupid.

I had my share of pictures taken the first weekend when I was dressed like a witch. It comes with the territory. I was also frequently asked for an autograph. The Gardner Witches hand out a glossy 8x10 photo of the coven. Neither Ro nor I are included, since we work for the Carriage Company and not Gardner, which is fine with me. So, when asked, I would sign my name in the corner. I know that unlike an autographed photo of, say, Johnny Depp, that puppy will last about two days then go straight to the recycle bin.

This weekend I had my first request to have my photo taken with a rider as the tractor driver. Upon reflection I think he really wanted a picture of him & the tractor alone, but I wouldn't get down for it. Someone has to keep their foot on the brake so we don't roll down the hill.

Request for autographs as a carriage driver are few and far between, however I'm in family vacation photo albums from Saskatchewan to Singapore, just like carriage drivers from all over the world. And the way a tourist approaches you for a photo can be varied. Some will ask, others offer to pay, many just snap away and some try to be sneaky. And I don't mean to profile, but in my experience Asian tourists are fascinated with the poop bag (or "Diaper" as some call it) and take close-up photos of it. And that leads me to wonder if 1) Asiatic horses don't poop, or 2) they are allowed to poop willy-nilly and Asia is covered in random piles of horse crap. So is the fascination with the poop or the bag? Inquiring minds want to know.

By the way, random people need to quit trying to tell us our jobs. We put about 20 bodies on the wagon, because that's about the Max Occupancy for the witch's house. Yesterday a lady informed me that we could get at least four more on the back of the flatbed. I said, "That's great, but we can't cram any more into the train car." It's called "Ride to a Witch", not "The Sardine Can Experience."

Here is a text between Ro & I from Friday when the passengers waiting for the ride were lines up 6 deep and 30 long:

Ro: A taco stand right here would make a killing

Me: Hahaha (I know, I'm full of sparking witt and clever riposte, but mind you I'm texting while driving a tractor hauling a flatbed wagon filled with people.)

Once when I was stopped to load I got down and asked Ro to tell all the children not to talk to the tractor driver unless their hair was on fire. Two children had been calling out to me the entire ride back and not only is it distracting but if they keep screaming at me I can't tell if there is something really wrong or they just want me to wave "Hi" to them. And, of course, all y'all know I'm all about interacting with children. (Ach-tooey!)

Another time when I was stopped and got down (understand that I'm driving a tractor, not a Caddy, and the machine tends to be very rough and loud plus there is no power steering and the front end shakes with every rock I hit. And I drive on a road covered in gravel. So, I get down a LOT ) an older man who had been conversing with Ro followed me to ask what gear I was driving in.

"I have the same tractor," he said, "I just wondered how you were driving her."

So I advised him that I started "Her" in second and remained in it, topping "her" out at ¾ throttle. He seemed satisfied with my answer, so I guess I pass the "What the hell is a woman doin' drivin' a tractor?" test.

Ro says I need to tell you that I sent her the following text, which she found immensely amusing:

Me: Ok, U got any more tractor groupies that wanna hang with me?

A group getting on at the Witch's house handed me a purse that was left on the wagon. So I drove a full rotation with a purse on my shoulder, which not only shows that women can drive a tractor, but we can do it fashionably and with panache. Although I am the first to point out that the green paisley bag did not match my grey Coleman work boots.

I drive a 1999 Jeep Wrangler, not the smoothest or most luxurious vehicle known to man. In fact it's a lot like driving a brick with the suspension of a go-cart. But recently, after piloting the tractor for three hours straight, when I get in the Jeep to drive home, it feels unusually smooth and responsive…


One week before the last day of the ride, which began the first weekend in October, we finally get a sign people can see 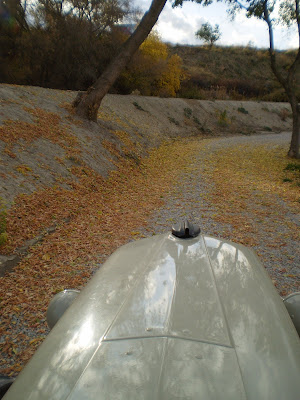 This is my favorite corner 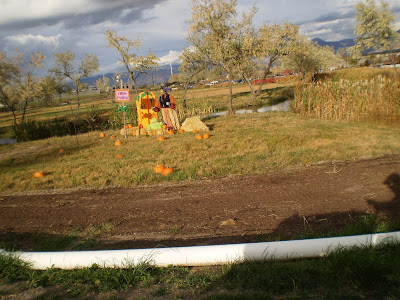 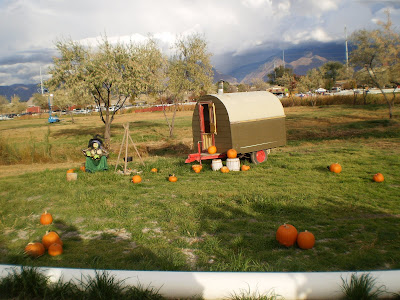 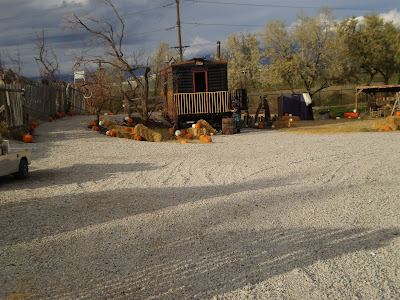 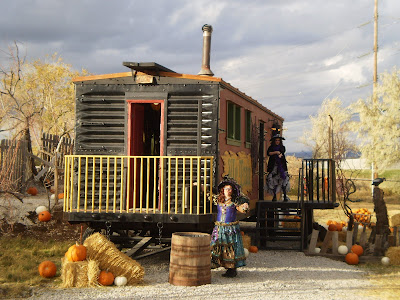 The witchs are home 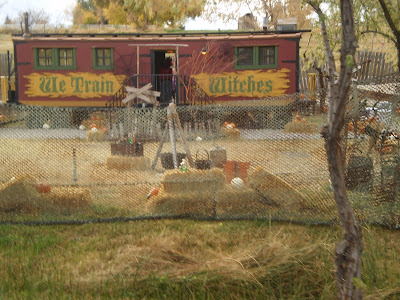 And this is where they live 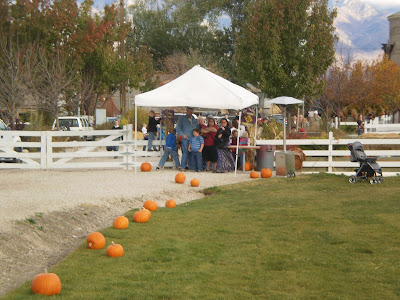 And finally, for you skiers, if you've ever read about the meteorological "magic" of Little Cottonwood Canyon, home to both Alta and Snowbird, here is what they're talking about: 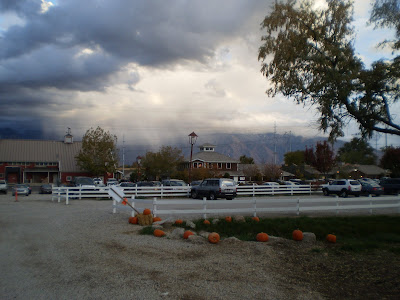 That flurry of white stuff is rain, confined to the Canyon. Higher up, it's snow.

Even though this feels contrary and maybe disrespectful to the blogger, I must say (I simply *must*) that those pictures are pretty and the whole thing looks like fun to me.

I'm getting my mom a puppy today, even though I know she hates surprises. But it's a *puppy*!

It IS fun, lots and lots of fun.

Just, you know, not for me.

And why a puppy? Didn't you just get one? Here's an idea that will be less expensive and painfun in the long run: just shoot yourself in the foot. It'll keep you busy, cost a lot to fix, but eventually it'll heal, unlike a puppy.

I happen to drive a fairly rough riding truck, myself (we call it the white elephant)But there is nothing like taking my driveway at 15 mph (even the hubby drops to 10) just to bounce the kids awake.

I will have to post the pics of the driveway one of these days.

Are there still ponies at the Village?

Are there still ponies at the Village?

Yes, along with the rest of the critters at the petting zoo. Did I never mention that we're situated right next to them? It's especially nice when the dew rises and you get a hefty wiff of damp sheep.