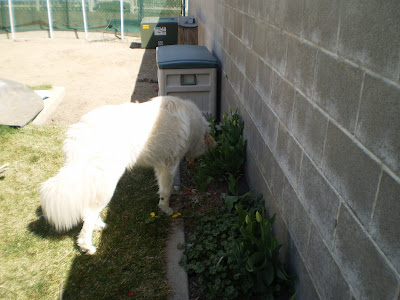 When the children of Luna's foster mom confided to Mr. Slave Driver that "she eats everything" they weren't kidding. Not that it matters, much. So far Luna's kill count includes a pair of flip-flops, a piece of PVC that holds up the Tiki-Torches, numerous toys, and my tulips.

Not the bulbs, mind you, which are toxic, just the flowers. 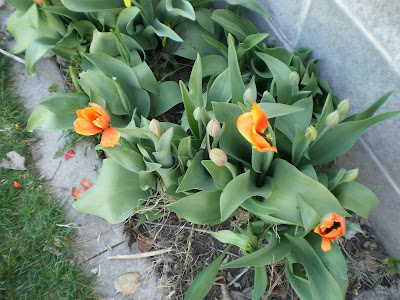 The flip-flops belonged to The Kid, and she had been warned. "Do not leave your shit lying around!" I'm trying not to set this dog up to fail, so everything I could think of that might be a problem had, I thought (foolishly) been addressed. The fact that Luna drags huge hunks of wood destined for the fireplace from the woodpile into the middle of the yard to chew is not much of an issue— after all they're just going to be burned anyway, right? Maybe she feels the need for a more fibrous diet. So there is no need for them to look all pretty and shit. But the tulips, well, it's not like I can put them up high or anything. I know I'm going to have to fence off my strawberry patch, but I didn't think I'd have to do anything drastic with the tulips.

I also have a plethora of raspberry bushes. So many that I often get tired of picking them half way through the season and just let them rot on the vine. I'm lazy like that. Every couple of years I go out and do a slash and burn, pruning them back to stubs. It's a Neolithic way of gardening, but I'm not into horticulture enough to care. Plus the stickers on those bastards hurt. And, apparently, they snag a lot of dog hair. So much so that it looks a little like we're growing a hybrid form of cotton out back. 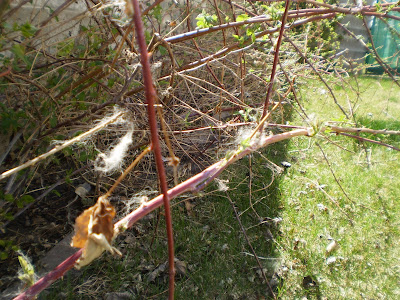 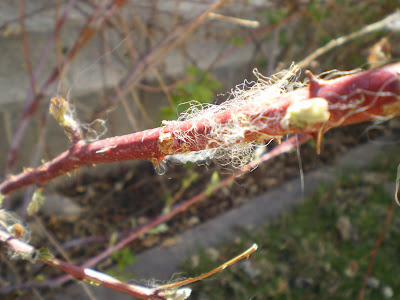 Also, we're going through toys like KFC goes through chickens. There used to be two boxes of dog toys in the house. Now, every toy that was in one of the dog toy boxes is out in the yard. Once removed to the yard, covertly, they are systematically destroyed. Every toy is first given a squeaker-ectomy. Then, after a bit more torture, for the stuffed ones the coup-de-grâce, a doggie style Hari-Kari is performed. It looks like Gettysburg for Care Bears out there, people. I kid you not.

The plastic toys are chewed into small pieces. But in a very precise manner. Luna begins at one end (usually the end that once housed a squeaker) and shreds it into small bites, not swallowing but discarding the plastic in the grass. I suppose I should be thankful for her not eating them; I hate trying to recognize stuff when it's wrapped in a package of dog crap.

Several years ago I was enjoying an adult beverage while floating in my pool. The Kid, whose chore it was to pick up the dog messes in the yard, was cleaning up when she came across a pile with two bright orange pieces of foam rubber, intact, in one of the piles.

GREAT Dog story. What a lovely dog mom you are. I love the "cotton" plants. Our white dog has hair like that, too.

Its too bad that I live so far away, I would love to salvage any berries that you are letting rot on the vine. Maybe I should come down and kidnap a few vines from you this summer:)

BPA, you are welcome to any of the leftovers, and if you want some starts, just let me know. Next time you are in town I'll be happy to be your supplier, and I can give you those stock tank heaters too.

Sounds like Luna has made herself right at home and is enjoying herself. Girls just wanna have fun, ya know. I can sure relate to Luna's destructive chewing. Our Field Spaniel destroyed a DVD from Blockbuster yesterday. It was on the kitchen counter. Funny story about your ear plugs.

*coffee explosion*
"do you want them back?"
Priceless.