I've previously mentioned my obsession with horses and how it carries over into my interior decorating. For one thing it makes me a very easy person to purchase gifts for; horse, realistic looking, preferably minus people, and not overly expensive. The last part being because my genetic makeup is similar to that of Bull+china shop=me+delicate expensive chotchkies.

None of my family will ever be graced with, well, grace. We're more the solid, sturdy, Neolithic, help-a-friend move their piano kind of people than the stylish, flowing, elfin, ballroom dance kind of people. Except my mother; she traveled to Argentina to Tango when she was 75. Maybe I'll pick up some coordination as I age, but it's highly unlikely.

On Saturday, Mr. Slave Driver gave in to my haranguing and we went to a so called "Starving Artist Sale." Here it's held about once every four months at the downtown Sheridan. We arrived and perused several hundred oil paintings, many of which were renditions of the same theme with subtle changes. I found only four that included horses. One was an image of a race horse flying down the home stretch. To me it appeared said Thoroughbred was finishing the race on its knees, but that's what I get for having actually witnessed the "Sport of Kings", Arlington Park being a favorite haunt of mine. I share boarded a 17 hand, off the track, race horse once. His name was Tillingbourn. He knew how to do two things well; make wide left turns, and run like hell when the arena phone rang. Eventually he was donated to the Chicago Police Department. I don't know how his new career panned out, but it had to be an improvement from his track record.

Anyhoo, we pawed through hundreds of oil paintings and finally I found one that was acceptable: horses running through water with mountains in the background. Not too big, not too small, like Goldilocks and her uninhibited trashing of the Three Bear's house, it was just right.

So now here is the dilemma, and you get to weigh in; where shall I hang it? 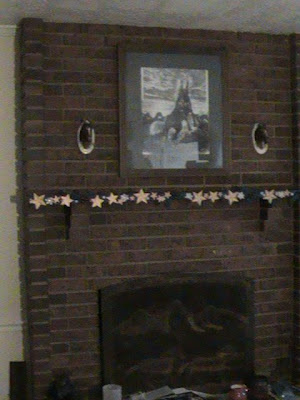 Or, over the entertainment center? 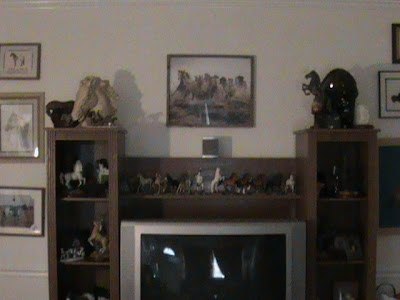 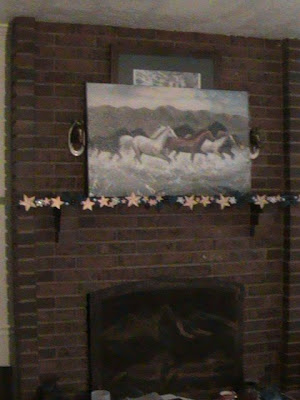 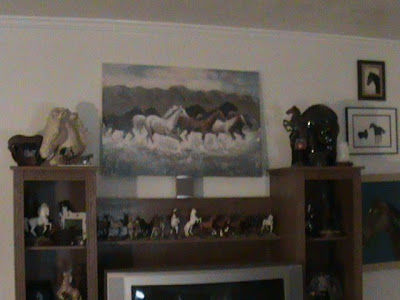 I know, currently it is without a frame, but Mr. Slave Driver has both the tools and the ability to make a wooden frame for it, and the one I like is Mission style, similar to my living room furniture. Giving him these tedious tasks keeps him off the streets and out of trouble. Plus he likes them, sometimes. Or else he just does it to humor me.
Posted by Lisa Deon at 9:28 AM

I vote for the fireplace. The entertainment center is already in danger of overgrazing.

I agree with Sage.

My favorite pics are horses, too. I have one of Mikey B in my classroom in addition to my 4-H horse in High school. I also have tons of pics of Belle and Foxy, especially right now with the countdown to baby. Tink's pics are up there, too.
I have Prayer at Valley Forge above my fire place (President Washington on bended knee, praying, with his horse at his side) It's one of my favorites.


coormand -- when you ask loudly for a beer

Ah, see? Therein lies the rub, for many of those grazers belong on the fireplace mantle, of which the Christmas themed one is still up. Yes, I know it's March, but it belongs stored up on a high shelf and I'm not tall enought to get it up there OR take the "Non Holiday Themed" mantle down. So some of the Entertainment Herd will migrate back to the mantle where they belong once that happens. I expect sometime in July is about right.

The entertainment center picture will move...Hell, I don't know. I'll find a place for it.

Oh, I've missed driving, and the good stories. I'm going to call Ro and sign up. See you soon!

We've missed you too, Nat. But with all your globe trotting and getting promotions...Well, you know.

I guess I'll start working again next month. But not during General Conference! Although I might come down and take pictures of the circus freaks...

Fireplace. I like a hunt scene over the fireplace, but horses losing their scent in a stream is good, too. My garage is filled to the rafters with oil paintings. I've got this cousin who paints a picture every month, and he's been at it a while. Also tapestries, big framed photographs,--houses need more walls, Driver. Four per room just isn't enough. Fireplace. Keep the stars.

No way can I match BPA's coormand.

Make mine a Munnings: