My own Private Idaho

First, we're going to start with a key.

In an effort to be good Americans and help stimulate the economy, we purchased a new truck this weekend. Not only that, but we drove over 1400 miles round trip, stayed in 2 motels, ate at 3 restaurants (and tipped the waitress) in order to do it. So I believe that we have done our part. The rest of you's need to get on the stick.

Why did we buy a new truck? Well, one reason is that in December, right around Christmas, I lost my "big" key ring. I have 2 sets, one with just the garage door opener fob & Jeep key and the other has everything , you know, 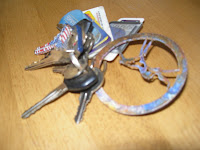 EVERYTHING. All those annoying "Tabs" they give you to scan at the places you frequent. Blockbuster tab, Albertsons tab, Office Max perks tab, library card, etc. That one. Twice a week I went to Wal-Mart (because that's where I thought I lost it) and asked if anyone had turned it in. What I have learned about Wal-Mart is; they have a drawer by the cash registers where the things that have been found go. However, once the keys have been around for a while they migrate into a box they keep behind the counter at the service desk. Apparently, this box is a well kept secret, because on several of my visits I had to tell the service desk employee where they could find the treasure chest so I could paw through it, hoping that my keys had turned up there. You see, besides a key to my Jeep, which is a simple thing that looks like, well, a Key, and costs $1.06 at True Value to copy, the high tech keyless entry and ignition key to our Dodge truck was on that key ring. When my big key ring went AWOL I refused to get a new Dodge key because it costs $90.00 for that type. I also kept hoping that it would turn up at Wal-Mart. I am an eternal optimist.

I did eventually find my key ring. No, not at Wally-World, but in my front yard. Apparently I dropped it whilst assisting Mr. Slave Driver with snow removal. He, in turn, unknowingly sucked it through the snow blower, which launched it into our front yard. It sat, buried under the avalanche of accumulated driveway snow, for a month.

Lesson learned? Keys with remote keyless entry functions do not fare well in a cold, moist climate. Of course running through the churning snow blower was not exactly good for them, either.

Anyway, it started with a key, and then we decided that repair costs and other factors validated our new vehicle purchase. So, Mr. Slave Driver did some research, took care of all the financing information, and off to Kellogg, Idaho we went to visit one of the highest volume car dealers in the United States.

Now, I have long subscribed to the theory that it is, indeed, a small world. I have numerous examples of this, but here is one: My friend and I, on vacation from Chicago, were sunning ourselves on a beach on Hilton Head Island, South Carolina. A man walked up to my friend and asked, "Aren’t you the waitress at the Pickwick restaurant in Park Ridge, Illinois?" Yes, she was. He was a regular customer.

So it was really no surprise to me that as Mr. Slave Driver and I dined on lunch at the Perkins Restaurant in Pocatello, Idaho, in walked Omar.

Omar is the projectionist for the Rose Wagner Theater during the Sundance Film Festival. That is the venue I volunteer at. Every year, for ten days, I see Omar. It was no surprise to me because we were only a couple of hours away from home. Had I seen him at a diner in Chicago, I would have astonished.

Now, for those of you unfamiliar with the American west, there are vast stretches of land with little or nothing to see. Except, of course, land.

On part of our journey we cross the Lava Fields in Idaho.

The first time we drove through this area I had no idea what the hell it was. It looked like black rocks. But there is a rest stop with the geological information right around mile 100 on I-15. Very interesting stuff.

Also, further along, up into Montana (to get to where we were going you drive through Utah, Idaho, Montana, and then back into Idaho. That’s what Idaho gets for being such an odd shaped state) there are vast areas of pasture land. This is the place where "The deer and the antelope play." We saw both deer and antelope, but I must admit I never saw them play together.

Those beige dots are Antelope.

The car dealership takes up most of the small town of Kellogg. Our salesperson advised us that since the mine closed, this business is the biggest employer around. I believe it.

So, after what seemed like an eternity of waiting around, we finally got our new vehicle. Having a nice long ride home gave us time to read the manual and check out all the cool new equipment. But my favorite is the key.

But you stick it in the ignition and it starts the car. Then, if you want to lock your car and walk away so it warms up, you do this:

And voila! You have a key.

I hope it'll pass the snowblower test. The old one didn't do so good...

I am fairly good at losing things, too. My key to my husband's vehicle went missing (obviously MY fault) He found it this weekend in HIS vehicle on the driver's side door. I am guilty of losing my watch and my wedding rings, though. I just hope to find them before we move again. I keep wondering if it might be lost in my school desk. It currently looks like a propaganda grenade went off and dumped papers everywhere. I better find them soon before I seriously annoy the hubbie.

enine-- You sank my battleship

I can't find my camera again, either

Masess-- a huge mess on the desk of a science teacher