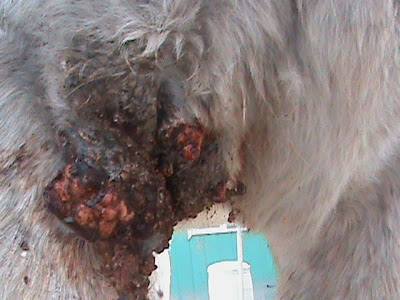 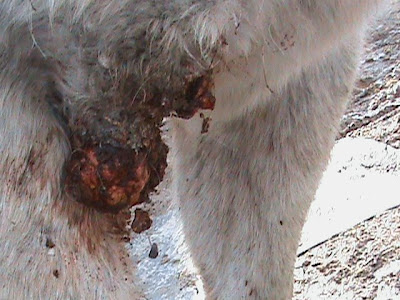 Stan, the name I've given to the sarcoid tumor blob which has taken up residence on my horse Dreamer, has proven to be a tenacious little sucker.

Buzz, Dreamer's vet, has been giving Stan the "Liquid Nitrogen Delight" Spa Treatment for several weeks now, and the result has been a larger, redder, angrier looking tumor than the Stan with which we began this odyssey.

Obviously, Stan is being quite uncooperative. Dreamer aint too happy about the entire operation, either, but since most of the time he spends with us he's under sedation, it's not that big of a deal.

Today, after examining the post popsicle Stan, Buzz and I decided to change tactics. We're ditching the freezing and moving on to an ointment. Enter XXTERRA. 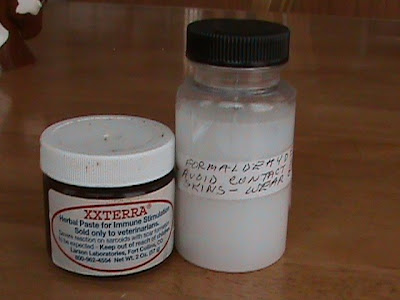 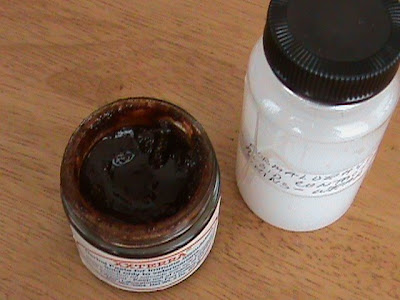 It doesn't list the ingredients so it must be made of fairy dust, red dye #2, and Vaseline. At least that's what it looks like. It's high cost is due to the inactive ingredients of Diamonds, Gold, and Imported Virgin's Saliva.

So, first Buzz gloved up and peeled as much of the crusty, bloody junk off of Stan as he could get. Then he dug around in the pus for a while. (Oh, I'm sorry, were you eating? If you've been here before you should know better by now. That'll learn ya. If you haven't then I'm sorry, but that'll learn ya.) Then he poked around, probably just to get Dreamer good and pissed off, (maybe horse anger is one of the catalysts to make the Xxterra more effective) and after getting Dreamer all riled up he applied the reddish goo all over Stan.

I also got a small bottle of what Buzz said was Formaldehyde but I think it's Formalin. Anyway, it's another alternative Buzz came up with, although it's labor intensive, meaning I have to go to the barn every day and apply it to his leg. I'm going to try it on the backside of Stan. 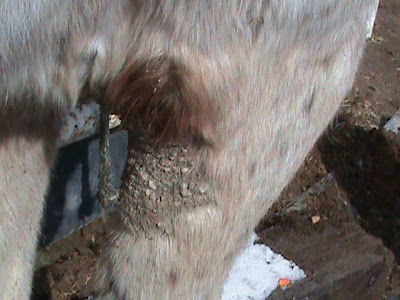 The scaly skin wraps ¾ way around Dreamers leg but the stuff on the backside has never been much of an issue except for its gross and ugly appearance. So we'll be running a little clinical trial of our own to see if the Formalin will do it any good.

In the event that neither of these treatments make an improvement in reducing Stan to an acceptable size, I might take one of my kids Breyer horses, make a "Stan" out of red Play-Doh, and start sticking pins in it. Kind of a Voodoo Stan.

Apparently, Stan is of the Antarctic variety and prefers and even thrives in cold conditions. Have yo tried the blow torch method? Seriously, I hope that the Formalin/Formaldehyde works.

Nothing I could come up with on my own matches the gooey goodness of today's word verification.

Was just thinking. My brother uses a clamp on his bull calves instead of the old-fashioned clipping. Could you do that to Stan? I think the device is called burdeezo.