Pappa's Got a Brand New Bag...

Thursday started off like most Thursdays do. Read the newspaper, coffee, checking e mail and blog status. I noticed on the Feedjit that someone visited from Murray, Kentucky by Googling "morgan freeman, d.v.m." He's our barn Vet. I didn't check the link, which I do sometimes because I'm 50% anal-retentive and 50% curious.

On a whim I called Ro, barn manager extraordinaire. She works Thursdays, Fridays and Mondays and sometimes I drive downtown and we have lunch together. Occasionally we are joined by MBA, The Fabulous Todd, or the carriage company owner, but today it was just the two of us.

During lunch I mentioned the Murray, Kentucky blog visitor. We hurried through our meal because she needed to get back to the carriage barn. Kid, one of the longest employees of Carriage for Hire, was being retired and Crazy Shelley, a driver of ours, was meeting us there at 1:00 pm to fill out the paperwork. Crazy Shelley, who is not as crazy as her name denotes, works for the Hippotherapy program where Kid was retiring.

I guess retiring is not what happened to Kid, but for a carriage horse to go from working one or two days a week pulling carriage to walking around a soft arena with a little kid on his back an hour or two a day is the equivalent of a steelworker going from working the mills to becoming a greeter at Wal-Mart. Enough mental and physical exercise to keep them sharp, but not enough to wear them out. For Kid, who is broke to drive and ride and absolutely loves children, it's a perfect match.

When Crazy Shelley arrived I asked her about the program Kid was entering into. She told me it was called Courage Reins, and advised that Kid would be well cared for and loved. The love part is very important to us. (Right, Belle's Personal Assistant?) We do do love our equine co-workers, and it's good when they leave us for a place where they are showered with as much affection as they get from us. Marky-Mark, for example, will be heartbroken.

I had to leave, errands calling me away from my final fare-well to kid. But I took a couple of pictures with my cell phone for my virtual scrapbook. 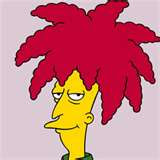 Anyway, I took off and went to Wal-Mart where I bought some lettuce starters. I had a big garden when we lived on the farm in Missouri, and miss the lettuce the most. Being able to walk out your door and pick a salad is handy and rewarding. I just don't eat enough greens these days.

When I returned home Ro called and asked if I could work; they were desperate, having booked three appointments all at 6pm and only having two drivers scheduled for the evening. So, after some whining and finagling, I agreed. But before I left the house to return downtown, where I had just been, I checked the Feedjit again, clicking on the Murray, Kentucky link out of that anal-retentive curiosity.

A Morgan Freeman, D.V.M. inquiry brings up only two links: Confessions of a Slave Driver, Cletus Master of the Urineverse and Courage Reins.

How freaky is that?

And, on a totally unrelated note, Carriage Driver Kar told me that last week she was explaining to some children what a horse's Chestnuts are. If you don't know, go here. Anyway, when she'd finished her lesson she was approached by a man who called her a "Blasphemous Blasphemer." You know, it's an evolution vs creation thing. She was mildly impressed that he could say it so fast without tripping over it like a tongue-twister.

So, from now on Carriage Driver Kar's nickname is "BB, Darwin's Satanic Imp."
Posted by Lisa Deon at 10:16 AM

Bon Voyage to Kid as he rides off into the sunset with a little kid on his back. Those camps/schools that use big giant horses to bring little kids out of their dark places really get my respect.

I never knew what a horse chestnut was. Being from Tx, I know about horse apples. Horse radish. Horse feathers (my dead old dad's favorite expletive).

Plant some basil for me. Ooh.

Although I totally don't get the connection between horsechestnuts and blaspheming.

Although I totally don't get the connection between horsechestnuts and blaspheming.

There are Horse Chestnuts and a horse's chestnut.


A horse's chestnut is believed to be the last vestige of one of multiple digits belonging to eohippus, or the "Dawn Horse", another other being an ergot and the one most civilians are familiar with, the hoof. Explaining how eohippus became Jerry Percheron apparently is an afront to God.

Which is why God punished us and took away all the Unicorns.

First off, Kid is one of the most amazing horses. I think that I may have mentioned this earlier, but those that hate my pop quizzes, here is an update. Kid is the horse that was working the day that the tornado hit downtown Salt Lake, destroying everything in its path. Kid was within a city block of where the funnel actually was. He was hit with a falling branch. He patiently waited as the driver hid UNDERNEATH him until it was over and then managed to manuever around the debris to make it home. When he was a teammate with Chief, a cute little percheron that could do anything, they became the mighty team that could do anything. Kid was hitched with a unbroke mule for a movie shoot and had the stupid thing behaving in a semi-appropriate manner for the day.
Kid also thought that he was still a stud. He was cut very late in life. One night at the park when we had a bunch of the city horses at the park, Kid was tied up because he kept trying to challenge Red. Red was HUGE. Kid only thought of himself that way.
As the very proud owner of Belle, I love to see these big kids find happy homes when their paying jobs are done. When Mikey retired, I was not in a position to buy him, but he went to a place where he would be well taken care of as a family carriage/wagon horse.


Second, I am a Biology teacher. I teach evolution. I am LDS (mormon for those that don't understand the whole Latter-Day Saint acronym). These two things are not incompatable. I don't understand why so many self-proclaimed "religious" people have a problem with evolution. Why can't God follow his own rules? In the bible, it said that Adam came from the dust. Would that not be the primordial soup that life came from? Where the heck did the fossils come from?

I fight against close-minded people all of the time. I have no problem with people having their own opinions, and when I ask for a student's opinion, I will not deduct points if theirs differs from mine, but if I ask about theory or facts, I don't want to hear their opinion. I want discussion. It can be fascinating. My student's had to watch a video about the voyage fo the Beagle (Darwin's ship) and then tell me if they would have come up with some of the same ideas that Darwin did. It was fascinating reading their responses.

Ya know, this should have been a guest blog rather than a comment. It certainly is long enough!

Spentat -- I asked my husband where his paycheck was and he responded, "Spentat..."

I know I"m late to post on this one, but I'm still trying to catch up. Hooray for the drooling Kid!

BTW, Courage Reins and Crazy Shelley are how I got introduced to carriage driving! I was a vollie (volunteer) leading children and people with disabilities around the ring on our equine friends. Then the non-profit found out I know the difference between a monitor and keyboard, and stuck me in the office doing, well, office work. Yuck. I get paid to do that 50 hours a week. I want to play with horses. So I found a place that will pay me to play with horses, and not a computer in sight (unless you count my mobile which has email, internet, and phone capabilities).