"Bill, There Are Strange Things Afoot at the Circle K"

"I don't want you taking no more stinking pictures of me!!!"

It's been an odd week.

Monday morning my neighbor called. Her ex is a cop. She advised me to go into lockdown mode because some suicidal nutjob was walking around our neighborhood, sporting a handgun. I had to go outside and bring the old blind/deaf dog in. It's difficult to keep a low profile if you're standing out in the backyard in your jammies yelling "COWBOY!!! Get your ass in the house!!!"

I wasn't scared. After all, my home protection equipment includes a deaf/blind/circling the drain Border collie whose gas passing could subdue even the most hardened of criminals, and the accessory dog, a Pomeranian, who I could easily throw at an intruder. Believe me, her breath would knock you out. Plus I have a gun. I just can't remember where I put it. Someplace safe, I'm sure. Eventually they found said nutjob, all in one piece, the next street over. The last time something like this happened a mountain lion was three doors down. 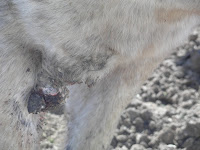 Tuesday I went to see how Stan was doing. He's still attached to Dreamer's leg. I was without an assistant, so I had to squat, hold camera with right hand, hold apple with left hand, take picture and avoid having my fingers munched. Naturally, in the midst of this my phone rings, Dreamer lobs apple spuz at my hair, and my pinky gets bit.
It was Ro. She wanted to meet for lunch.
More apples, please... 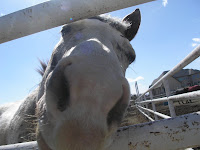 Later, back home, a young woman came to the door. I think she was selling some magazine thing…she kept talking about points and 200 children and a contest; her patter was very smooth and practiced…I was distracted by her tongue stud, which made her sound like she had a cue ball lodged in her mouth. Now, I'm sure I was staring, and sometimes when I get fixated on a thing I appear to have major retardation problems. She kept instructing me to open or flip the brochure and since I had a difficult time comprehending WTF she was saying, the girl would snatch it from my grasp and open or flip according to the rest of her spiel.

Finally, unable to take the mush mouth hard sell I said, "I don't want any magazines."

She yanked her brochure away from me and said, "Well, it's not about the magazines, it's about the children!" Real snotty like.

I guess that was supposed to make me feel bad. Unbeknownst to her…I don't like other people's children. I am turning into the lady that yells at kids for playing in my yard and confiscates the softballs that are lobbed over the fence. She would have been better off plying me with liquor or puppies. Oh well, her loss.

Wednesday I was Juror number 64705568. Since Friday night I have had to call a phone number every evening after 5PM to see if I was needed the next day. Tuesday night I was the lucky winner. In the morning I arrived at the appointed time (8:30) with a book (highly recommended) in "appropriate attire" (business casual) to do my civic duty. This is not a problem for me, remember, I don't have a "real" job. And they were giving me $18 just to show up. Jackpot!

No, I was not picked. In fact, none of us even got in because the case was continued. So, after 2.5 hours, we were dismissed.

Now, allow me a moment to comment on Appropriate Attire; Business Casual. Apparently, the term "Business Casual" is purely subjective. And, quite frankly, I can see where it would be. After all, who is setting the standard? For me, business casual means I wear black jeans, a white button down collared shirt, and ditch the Tuxedo jacket. Business formal, of course, would require the Tux and a tie along with my hat.

I dressed in khakis, nice blouse, Armani jacket (Hey, don't get all excited, I got it at DI for $8) and shoes without horse crap embedded in them. In other words, respectable looking.

And I gotta say, way more roustabouts than investment bankers there. Although at this point in economic time I could be wrong. They might all be dressing about the same.
Posted by Lisa Deon at 8:40 AM

Jury duty. Oh, yeah. They wouldn't let me bring my embroidery needles--but on day 8 I look over and see some chickie with knitting needles! Government,-- psh.

So, is Stan still the incredible shrinking tumah? Good, good.

You've picked up more push-buttons and thingies. Like a walking stick--the big wooden thing, not the bug. Or a boy scout. Very cool.

I picked up the book shelf thing at another blog. I was looking for something that I could display what I was reading without going into the html and changing it every day, and what do you know! Pictures of the book covers and everything!

Business Casual is a JOKE!!! I moved to Wyoming so that I could wear my boots and not get crap --- the boots have enough crap on them already:)
I am not supposed to wear jeans except on Fridays. When I am doing labs or working in the greenhouse, I tend to ignore the rules -- hey, I'm wearing a lab coat.
Or I'll throw a jacket on with a button up shirt. I was a carriage driver for too many years. Nice jeans means I am dressed up.
I chaperoned the fall formal in black jeans, black tux shirt, black tie, black leather vest and knee length black jacket. The kids stayed away from the dark corners that I kept moving to. It was great!!!
Right now I am really stepping over the line because I check on Foxy every morning. I don't want to wear anything nice to the barn, just in case I end up staying. The kids get it. It's just my luck that twice this week I had surpize visits to observe either me or the team teacher.
What fun!?! At least today I was going over horse genetics, which is fun?
clobegr -- a burger made of clover

quatles--those extra wrinkles you get over your eyes when you go around looking surprised all the time.