This weekend I went to Wease's. 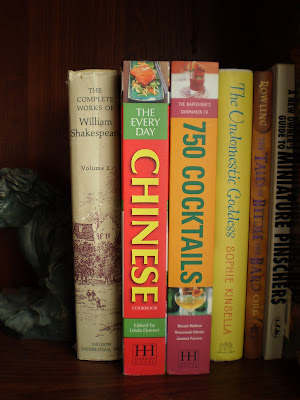 
She is a former carriage driver who lives in Northern Utah, just this side of the Potato Curtain. That would be Idaho, to you non-Utahan's.

Here is the Ward House* across from Wease's house on Friday afternoon: 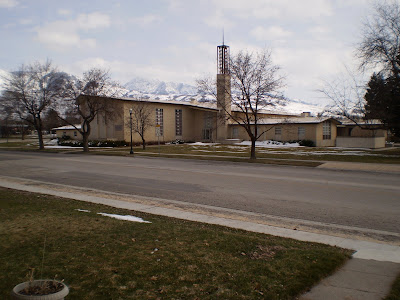 Friday, upon my arrival, we went into Logan for Indian food, which was delicious. I caught Wease up on all the recent happenings at the barn, including Kid's retirement and subsequent return by the Hippotherapy** program. Then we returned to Wease's and played Guitar Hero Rock Band, or something to that effect, and drank wine.
My friends are gamers, I am not.

Much of the day I got "The Stare" from Wease's pack-o-dogs. 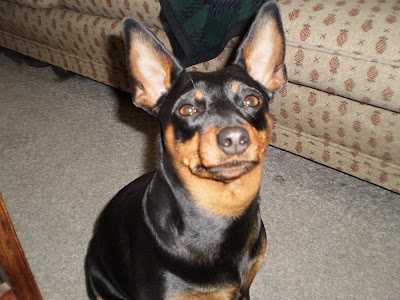 She speaks with a German accent and is always trying to think up ways of getting around the rules. We, as a race of humans, are lucky that she is not taller, or has opposable thumbs. Either would be very bad. Both would be the Apocalypse. 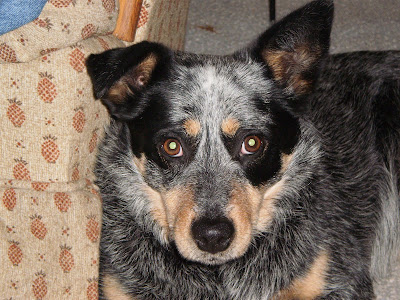 is the social butterfly, but only in the sense that the hostess at Denny's is really glad to see you. Happy you've come, glad you like the food, now pay the damn bill, tip your waitress, and go. Belle likes to administer the random lick in passing just to remind you 1) she knows you are here 2) all the toys in the house belong to her and 3) if you try to steal any when you leave she will remember your DNA and unleash the hounds of hell to hunt you down.

Rosie is my favorite because, like me, she's old. 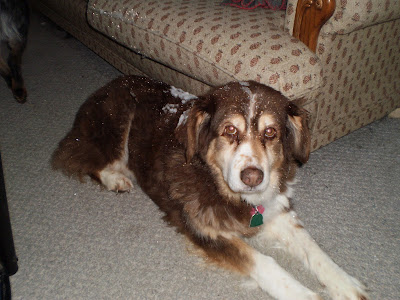 She sleeps a lot. She's cool. She spends a lot of time watching the other two dogs and rolling her eyes.


Saturday morning we had to deliver a gift to a friend who'd just had a baby. Neither Wease nor I are big fans of babies. Given the choice I'd rather play with someone's rabid puppy. Or cuddle a wolverine kitten. So I volunteered to stay in the Jeep, motor running, as a good excuse for Wease not to have to go inside and possibly be forced to actually look at or even (shudder) hold the baby. We were both pleased to find the friend not home, and Wease left the bag on the front porch.

Her friend lives outside of Preston, Idaho, a quarter mile from the house that Napoleon Dynamite "lived" in. So here, for your viewing pleasure, is proof that it is a real house. 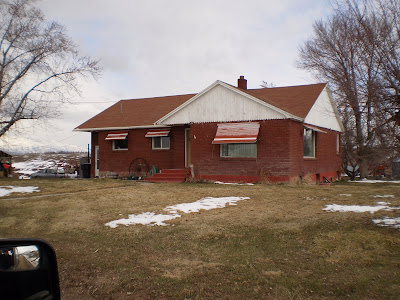 And for those of you without a strong grip on reality, there is no Napolitano Dynamite, and this is not really his house. I'm sure that the people who live there are so happy to have random a** holes drive down their street and take pictures of their house. And if they didn't know, then they should sue their realtor: It's called disclosure, like meth labs and mold.


In the afternoon Wease had friends over and we played Rummykub. It's an addiction within our circle of friends and everyone has a set. It's kind of our secret shame. But we have fun, and of course Wease cheats. But I call her on it and everyone knows she cheats. 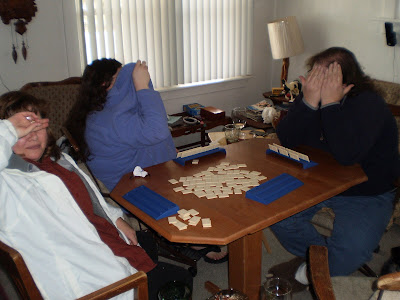 After we played Rummykub, we went to see "Bedtime Stories" at the cheap show in Lewiston. The theater is old but it only costs $2 which was good because not only was the sound messed up but the non-stadium seating means anyone older than a grade schooler blocks my view. I, naturally, ended up sitting behind Shaquille O'Neil's sister. So most of the film I watched the back of a woman's head. But I'm used to that.
Inside the Lewiston Cinema 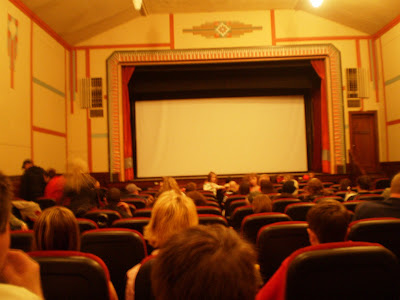 I knew it was supposed to snow on Sunday but I thought it wasn't supposed to come in until later. So, I was going to beat it using my Rocket Car, and be home Sunday afternoon. By 7:15 Sunday morning, when I could no longer take staring at the cracks in the guest room's ceiling, I looked out the window.

Overcast, but nothing else.

By 8:00am, when the freshly brewed coffee finally lured me out of bed, there was a blizzard. Now, remember that ward house? Here it is Sunday morning. 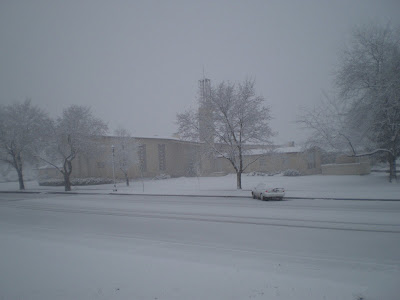 But it was okay because, you see, I don't have a "real" job, so it's not like *someone* would expect me to be at my desk/station/the Tilt-a-Whirl controls; asking "How may I direct your call?"/"Is there anything else I can do for you today, Mr. Clooney?"/ Would you like fries with that?"; dressed in a Hazmat Suit/Deep Sea Diving rig/Pasties and a g-string. So, staying an extra day is no problem. 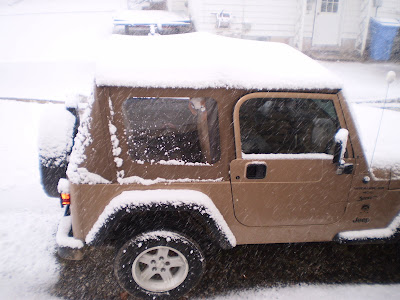 This gave us the opportunity to discuss Kid's retirement problem further; Wease is a horse person. She currently has two, with a young 'un on the way. She has always liked Kid, and decided that she wanted him to spend the rest of his days with her mares, going on the occasional trail ride in the mountains. She also has two carts, one of which would be perfect to hitch Kid to and be-bop around town in. So she left a message for the carriage company owner and waited for a call back to determine the outcome. During a break in the weather we scampered over to Wal-Mart where I bought dinner fixins' and the movies "Quantum of Solace" and "Bolt." We also played more Rummykub, and discussed Kid.

Monday I headed for home, braving the slippery slope that is Sardine Canyon after a snow storm. Which. Was. Not. Fun. Outside of Brigham City I got a call from Ro, barn manager extraordinaire. She'd talked to Wease earlier in the morning and wanted my input before she approached the barn owners about sending Kid to live with Wease. I gave her my stamp of approval.

Now Kid's got a new home. With Wease. 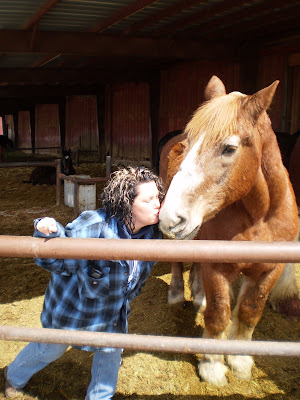 And we all lived happily ever after.

*A Ward House is where Mormons to church.

**For you non-horsey people, outside of the "Equine" family, (horses, donkeys, etc. this group is known as the even toed ungulates ((Perissodactyls)) because their feet have three or, as in the case of modern horses, one toe) the closest relative is the Hippopotamus. The study of horses is called Hippology. Weird, huh?
Posted by Lisa Deon at 9:32 AM

Kid IS starting to show his age.

The snow is just so much fun! Monday morning my better half ended up having to wait for the snow plow at a rest area before continuing on to work because he could not even see to the end of the hood. The hood is really not THAT long!

I don't envy the ride down Sardine, but it is a lot better than when I first went to USU. The road is much wider.

colog -- the spray that teenage boys use to cover up the fact that they have not showered in 6 hours. (not cologne -- the icky stuff)

My kid is currently contemplating USU for her college options. This summer I will make the trip to Logan and haul her around town for a day to see how she likes it. Weases tells me that there are 2 Indian restaurants, so that is a great selling point as my child loves Indian food.

It's far enough away so she will be "away" to school, but close enough to come home on the occasional weekend/holiday. Plus Wease is up there, so if The Kid has a problem Wease can help until the calvary arrives.

Indian food? That brings back fond memories. During the summer grazing months a friend of mine from Shiprock N.M. used to run sheep in the Wasatch for Dr. Osgethorpe. For a little change of diet I used to bring fresh vegetables from my kitchen garden up to him. Many are the times, after a day of moving salt around the ridge lines, that we sat in his little home on the range up Mill Creek canyon and sated ourselves on Indian food: fried bread, mutton, and whiskey.

When the booze was all gone we'd often saddle up again and ride over to the 7/11 that sits at the bottom of one of the ski hills near White Pine Canyon- I forget the name- or we'd ride on into Park City for something a little stronger than the Sev had to offer. I wouldn't want to try that ride now as the road into PC is not so horse friendly as it used to be.

I remember musing on one such occasion, as we rode up Main Street amidst disapproving glances, at what a great contrast there was between the Indian art in the shop windows and the rough, un-PC, image of my friend Henry. None of the shoppers seemed to realize that the real thing and his horse were walking right past them; nor that he gladly would have traded anything on his saddle for a few bucks or for the bottle we rode in for. No feathers, dream catchers or any of that sort of stuff to catch their eye, but he and his rig were a living embodiment of that practical, take-it as-you-find-it heritage. He used to pilfer boundary rope and parachute cord from the ski resorts and weave beautiful horse gear out of it. I still have a pair of hobbles and a lead rope that he gave me.

By the way, I sincerely hope that it is the cavalry and not Calvary that your daughter meets up with.

Hahaha,SagebrushEQ, yes I meant Cavalry, but I'm tarded and of course the spel checker said it was okay.

And we eat India Indian food-Nan, not fry bread. Tandoori chicken, lamb vindaloo. For a very short time I worked at an Indian restaurant and learned hoe to make nan in a tandoori oven. Very interesting.

All I wanted to do when I got home today was sit at the computer...but my internet wasn't working. I had left my firefox browser open from last night which included your blog tab...So I am officially caught up on your blog through last November and now my internet works. Thank you for getting me through these last few trying hours. Your blog has been the peanut butter to my plain dry bread. And the milk.

Glad to be of assistance in your time of need. Now at least one of us knows what I've been doing since November...