Driving Off into the Sunset with a Trailer Full of Kid

I resumed working Friday. I guess three months, give or take, was a long enough hiatus. Friday was also the day that Kid, Belgian draft horse and former employee of Carriage for Hire was to be picked up by Cory and hauled up to Wease's house to commence his retirement.

I got to the barn a little early because I needed to do some work on my carriage. While I was loafing for the last few months, Cliff, who is in charge of doing "stuff" around the property (cleaning the pens, repairing the carriages, you know, "heavy lifting" kind of stuff) put colored tube lights on my carriage and also installed a back rest. 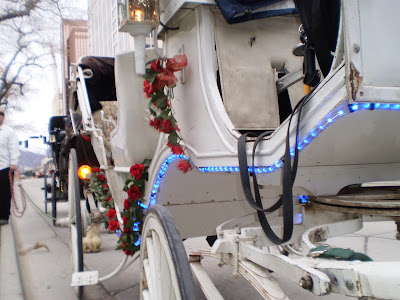 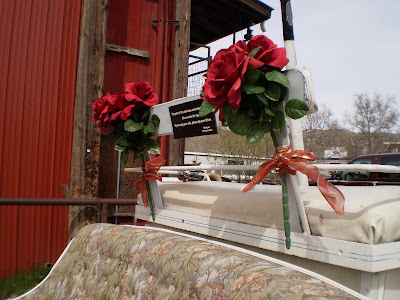 Now, several observations; I don't own my carriage. It's not technically "mine". I do, however, maintain it. I keep it clean, lubricated, and repaint the parts that get worn or chipped. If something needs repair, I make sure Cliff fixes it, and when I drive it I don't rub the wheels up on the curbs, or run into things with the hubs or steps.

Because of this "my" carriage is one of the best looking and best functioning (the fifth wheel turns easily, the brakes and lights all work) however, few people want to drive it because it lacked a backrest. Not having a backrest never bothered me. Why? Because in order to use the backrest I have to scoot my butt far enough back on the seat to lean against it. When I do that my feet don't sit flat on the floor, which is rather uncomfortable. So, in other words, I'm too short for a backrest to make a difference. Yet other drivers have complained to me that they don't like my carriage because it lacks one.

Well, not any more. Cliff has inadvertently made my carriage more appealing to the other drivers. Now I have to work more often so it doesn't get abused by unruly slobs who are unable to appreciate my carriage for the finely tuned piece of equipment that it is.

Anyway, here are before 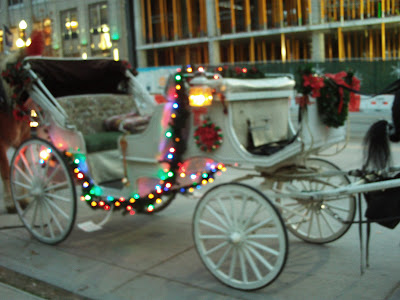 and after photos of my carriage.


Also, Cliff installed blue rope lights which don't exactly go with the red roses I decorate with, but blue is a hellava lot better than green or yellow. 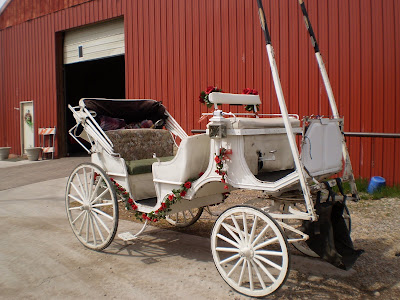 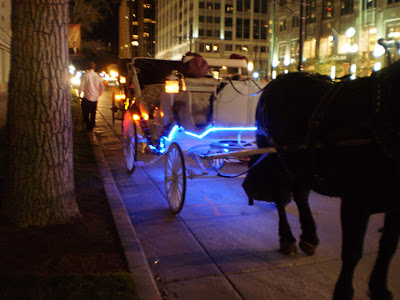 Back to Kid: Ro pulled him out of his pen and brushed him down so he'd be all ready to go when Wease's friend arrived to haul him up north to Richmond. 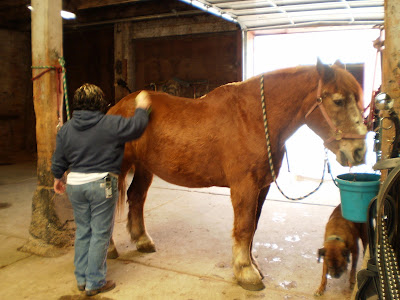 Then Kid and Harley shared a meal together. 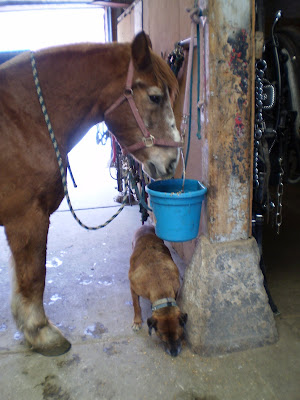 Ro and I said goodbye with hugs and kisses. 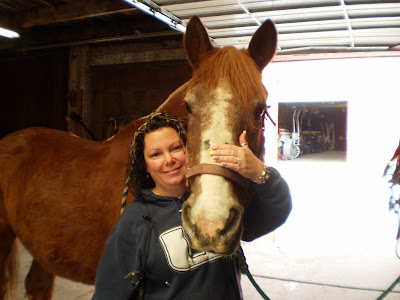 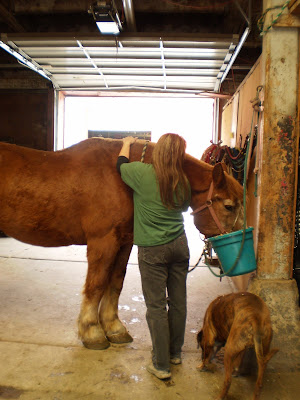 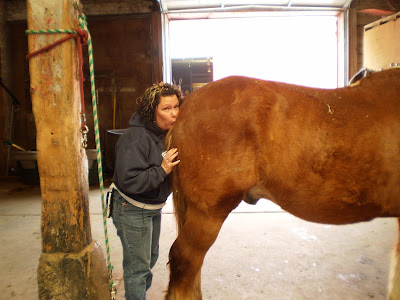 And Ro put him ouside to enjoy the sunshine. 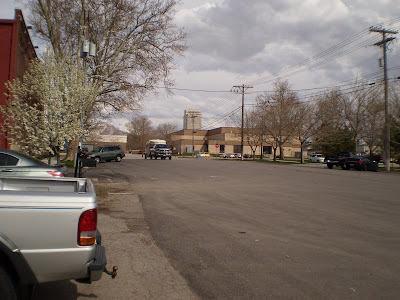 So Ro went and got him, walked him through the barn so the drivers working got a chance to say goodbye, and loaded him into his trailer to a new life. 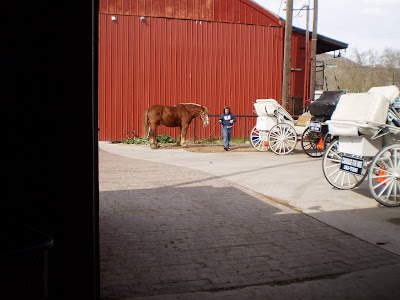 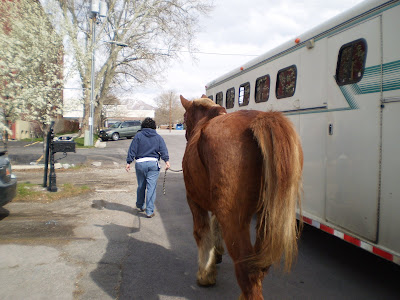 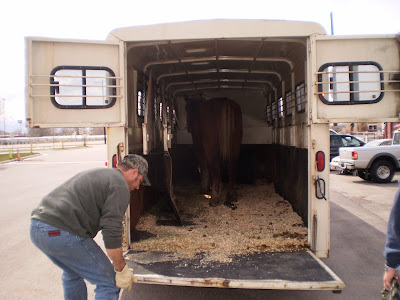 And we were sad, but we were also happy because we know that Wease appreciates Kid and will take good care of him.


Later that night while I was working at South Gate I got picture texts: 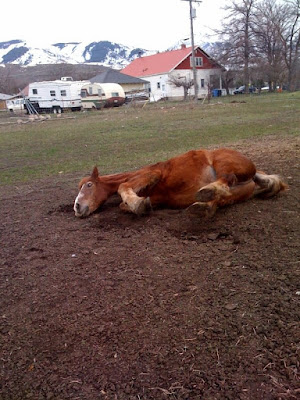 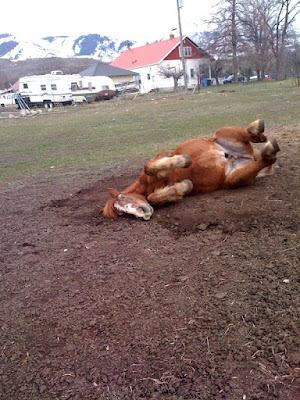 Kid is finally home.
Posted by Lisa Deon at 9:53 AM

Oh I wish all the best to Kid...his newest life phase. He looks like he is in heaven!

And now YOU get to work like the rest of us schleps! LOL.

Enjoy the back rest--as I am sure you enjoyed the rest rest. :)

Why is Ro kissing Kid's Derriere? Have the blonde highlights leaked into her brain? If Kid were a Equus asinus, I could see the whole, KISS my ASS, but he is Equus caballus, so that does not explain the situtation. I did see a Busted Ass ranch while looking for horse property. The entire place is painted pink-- like pepto -- No wonder I have been so sick.

BPA,
Since the first time Kid "retired" he returned, this time Ro was hoping it would stick by literally kissing his ass good-bye!

I, on the other hand, took a less invasive tact by giving him a hug. But I'll also see him again the next time I visit Wease.

Ok, I understand the kissing now. At least it was not Cletus. That is one big horse trailer for the tiny gerbil. He looks pretty happy out there rolling, so maybe the kiss WILL help. But then considering who has him, I don't forsee him returning. Belle isn't going back, either, but she would love that trailer:)

Wease hooked Kid up to her single axel gig and drove him around Richmond last Sunday. Nothing difficult, just hacked around her neighborhood. She said he was excellent, as usual. She has put him on a feed suppliment because she wants to put a little more weight on him.

He's in good hands. He'll end up being spoiled. Wease does love her critters. :)

Those blue rope lights will help a lot. I had 50' of them on my carriage and I got tons of customers. I switched to 80' of white and people would still pick the blue carriage over mine.

They did enhance my selling power,(the flowers help a lot too- The girls pick the carriage, the guys pay. Girls want romance, Guys want girls so they don't give a rats ass. If the guys picked the carriages I'd cover mine with beer cans and pictures of boobs) but now almost all of the carriages have the same style of rope lights which are wired directly into the connectors for the running lights, thus eliminating the need for an extra battery and inverter.

Doing this has now made us all more visible, especially when we are lined up at South Gate (and since the construction going on across the street has disabled the streetlights and it's very dark there now, this is a safety bonus) however,because they are a variety of colors it now enhances the "Tilt-a-Whirl" effect and we look like a travelling circus.