Sunday I should have been working on my manuscript, but instead I was here: 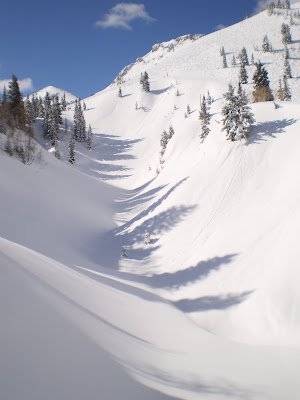 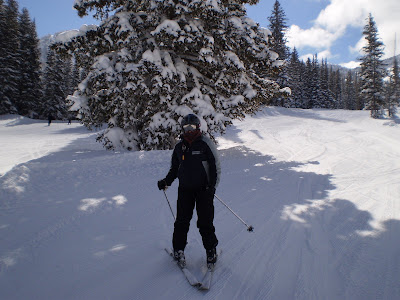 Which was fabulous, and way, w a y better than being here: 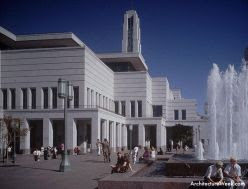 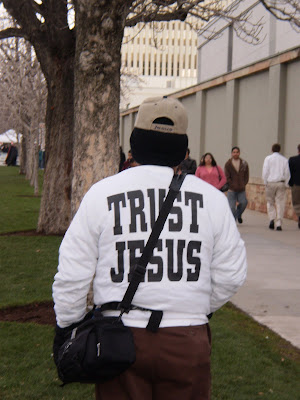 Watching them do this: 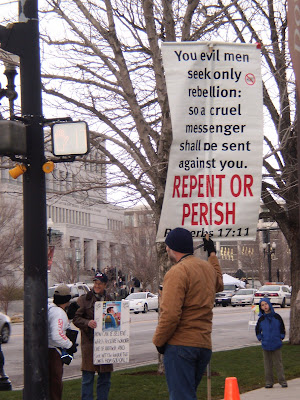 This past weekend was the semi-annual General Conference for the members of The Church of Jesus Christ of Latter Day Saints, commonly known as Mormons. Either of those are just too long to type all the time so from here on out in this blog they will be referred to as LDS.

The Conference center holds 21,333 people, the theater next to it holds 904, the Tabernacle holds 8000,and the Assembly Hall holds 2000 (all of these sites, by the way, are ON Temple Square) and there are, I believe, three sessions each day. So we have about 100,000 people descend upon downtown in a time frame of 2 days in a space of 2 blocks. All with little to no parking, and exacerbated by the construction zone surrounding downtown.

Now, numbers like these are too good to pass up, so people come out and protest the LDS church. Disenfranchised ex-Mormons, people upset with the LDS church's involvement is passing prop 8 in California, liberals, conservatives, fence sitters, and members of other religions who think of the church as a cult, or believe it is an affront to their religion. You know, the whole "My God's better than your God" debate. Maybe they're jealous; LDS have pretty good numbers.

Anyway, I used to work conference weekend because 1) I was new and didn't know what it was, and 2) I wasn't paying attention to the date. Now I look it up online and mark it in my calendar so I don't ever make that mistake again.

"Why?" You ask. "Why would Slave Driver pass up a golden opportunity to work a weekend when a boatload of people will be in town, many of them not from around here? You know, tourists = easy pickings."

Well, you know it's because of guys like this: 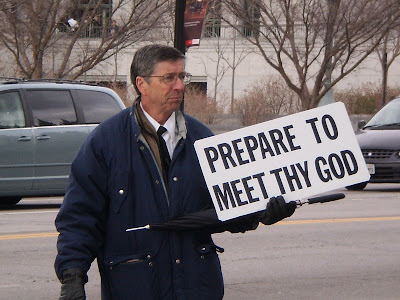 However, when they are in my face, shouting disparaging comments or waving signs either at my horse or my customers, I get a little angry. The protesters stand around and hand out bible tracts, literature against the church, and signs decreeing that Joseph Smith was a liar, and that everyone associated with them is going to Hell in a Handcart.

In the midst of this circus *WE* carriage drivers try to go about our business. Because of our proximity to the Temple, *They* assume that *We* are 1) owned by The Church, 2) are members of The Church, 3) make money for The Church and 4) and support The Church.

Now, that's just rude. I feel that it's rude to stand in front of anyone's church and dog them for their beliefs.

When they approach our drivers (usually newbies who have not been involved in this rodeo before) I shoo them away, invoking a "Dogma and rhetoric free zone" on the sidewalk around our carriages/horses/drivers/customers. I have also had them try to hand literature to my customers while driving around Temple Square.

Oh hell, no. I don't allow that any more than I would a panhandler asking people in my carriage for a handout. My carriage is my office. This is where I work; Your free speech ends at the step.

Now, you have to understand something. Members of the LDS church have been schooled by their leaders to ignore, not respond, not engage and otherwise turn the other cheek in response to this diatribe against their core beliefs.

Many of our drivers, due to statistics, are LDS. I. Am. Not. So, *I* don't have to practice pacifism. *I* get to respond. And, as a group, when the protestors get too loud, *we* sing either "I'm Henry the VIII, I Am," by Herman’s Hermits, or "This is the Song that Never Ends," by the late great Sherry Lewis and Lamb Chop. *I* talk for a living. *I* know how to project from the diaphragm
Posted by Lisa Deon at 9:06 AM

The Freak Show couldn't be a better name for this blog. Ugh...I remember those days. I remember once one of the protesters had garments on a stick parading around with them. I thought that was pretty funny. Sometimes they can be funny. As soon as they found out I'm not an LDS and that I think moronism, ahem...I mean, mormonism is a cult and a load of shit they were cool with me :)

Yes, but let's have a bit of disclosure here; you think all religions are a load of shit. And had the protesters been aware of that , you'd of had to fight them off with that stick because they'd all be vying for a shot at saving your eternal soul...You heathen pagan witchy woman, you… ;)

Aaaa-- the good old days. I don't miss them at all. And. I. AM. LDS! I would much rather just listen on the computer and avoid the whole SLC rush and annoyance.
Belle doesn't miss it either. She would much rather run around with her, I mean, Foxy's baby.

Staying out of jail is good, because, you know, then you'd be LOCKED IN WITH THE DOOFUS PROTESTERS.

Is there any way to spell doofus or dufus or doufuss that doesn't cause a red line of spelling shame to appear?

Dusty, who has tried three times to get wordpress to admit she owns that identity.

Dusty> First, thank you for your generous contribution to SYM- You jumped the gun on me, my Beg-a-thon blog won't be posted until Thursday.

Second, maybe Wordpress won't admist you own the Dusty ID because they know you are in the Witness protection program and want to keep your identity a mystery! ;)

An re: Mel's blog: Chuck is the show that adam Baldwain is on and if you recall I gave him and his son a carriage ride last year (the blog titled "I know you are someone I just can't remember who")

Castle is about a writer and stars the delicious Nathan Fillion. DWTS is Dancing with the Stars which I like about as much as I like American Idol, which is not at all.

And the show about Annie Oakley was on PBS's American Experience, which is always good/informative.

A good thing to remember:

I would quite willingly bail you out if I had the money and could get it to you but someone else made a very good observation. Better to stay out of jail than be in there with all the self-serving protesters.