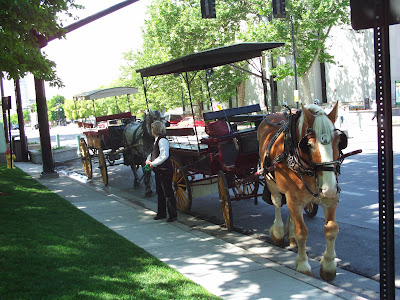 Being that I work in an uncontrolled environment in the presence of the general population and my maximum getaway speed is about 12 miles per hour, not only do I see a lot of weird and nasty stuff, at times, through no fault of my own, I'm involved in it.

For example, on Thursday MBA and I worked our specialty from 10am until 2pm. We spent four hours driving teams from a youth group participating in an "Amazing Race" styled activity around between the General Conference Center and the Family History Library. It was easy and boring. The highlight of my afternoon was when my mother and her friend ate their lunch outside the family history library where they had been doing research. I returned to West Gate with a wagonload of youth and coerced them into waving and shouting, "Hi Mom!" as we passed. 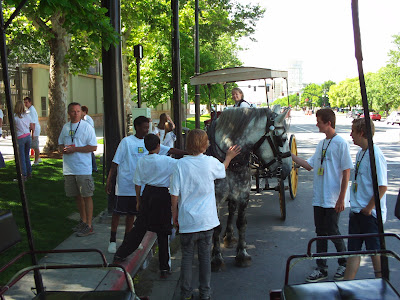 The day was progressing in typical boring and lackadaisical fashion when I was approached by a family. 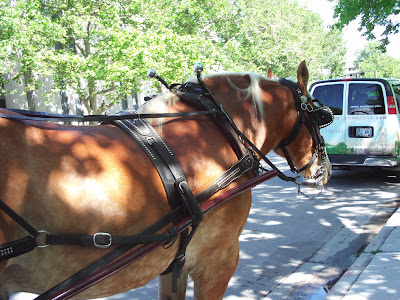 No sweat there, MBA and I had been fielding questions all morning, mostly about our availability. We handed out a lot of cards and advised people to come back after 5. This family also inquired about a ride and I handed them a business card and politely brushed them off. MBA and I were taken. Our time was reserved for the youth group.

Behind the family there stood a solitary man. After they wandered off he approached the wagonette, rested his elbows on the sides, and looked at me. "Did you want a business card?" I asked.

Now, I'm not going to repeat what he said because, while he used no swear words or even any of the late, great George Carlin's "Seven words you can't say on television," what he said was insulting and inappropriate. It also pissed me off immensely, which you will see in a moment.

Now, mind you, MBA is sitting on the driver's seat of her wagonette about 20 feet behind me and cannot hear what Mr. Creepy just said. All she can see is some random guy carrying on a conversation with me.

I paused for a moment, not really believing what I had heard him utter. Then, after it registered, and before he could continue with his wish list, I said, "Get lost."

Mr. Creep looked at me and said, "Are you with them?" as he hooked his thumb over his shoulder to indicate Temple Square, headquarters of The Church of Jesus Christ of Latter day Saints, AKA Mormons.

"No," I responded, getting louder, and then I added, "piss off!" By now MBA was watching with interest, still unable to fathom why I was being so rude.

"But I want to know how I get to one of those buildings with the spire on top," he said.

Not knowing exactly what state of mind this jerk was in, or his ultimate intentions, I scooted over to be within grabbing distance of my carriage whip, (Which, by the way, I keep on the vehicle for the sole purpose of using on people, not horses) and I responded to his statement with "Go ask them!" and indicated the information booth located directly inside of West Gates.

Then, just to clarify, because he hadn’t moved I added, "Leave!" My voice once again going up in decibels; I talk for a living, I know how to project.

He finally took the hint, and started moving in MBA's direction. I sat up a little straighter and prepared to grab the whip and jump off the carriage, because if he was going to pull that sh*t on MBA he would be on the receiving end of a royal ass kicking from me. He course corrected and sauntered towards West Gate, but not before he threw in over his shoulder, "You don't have to be such a b*tch about it."

And of course that goaded me into adding a very loud and nasty "F*ck you!!!"

By now MBA had saucers for eyeballs, and her mouth was doing one of those "Oooooh, you're gonna get it!!!" things. So, being that I didn't feel like shouting the entire conversation to her I indicated I would call her cell phone and I repeated the exchange verbatim.

Later she said, "I know you are very direct, but I couldn't figure out why you were going 'off' on this guy. But now that you've explained it to me, I understand. And I don't blame you. And I'm glad it was you and not me, because I have no idea what I would have done."

And my kid wonders why I don't allow her to go downtown and free range around the city.

Now, this is not the first time I have had to handle an unorthodox exchange with a local weirdo. Many times I have had to run off a person we have dubbed "Drunken Horse Whisperer." And then there's the guy with the hoodie and sunglasses that follows us when we walk through the back of the Gallavan center we call "Uni-Bomber." A couple of months ago Marky-Mark got into it with a panhandler and was punched in the face for his trouble. And don't forget that it was MBA and I working with the night the lady was standing outside South Gate talking to herself and cutting the clothes she was wearing off with scissors. So this is not exactly a new occurrence. But to date this is the first one that has made such a personal and sexual suggestion.

Because the animal rights activists that drive by and shout "Go f*ck yourself!" don't count.
Posted by Lisa Deon at 10:21 AM

Second: Those are some good looking horses.

Just when you thought it was safe to stand around in a big city . . .

Does the carriage driver uniform allow for gunbelts? Just asking.

And, yeah, like Suzy, I'd tend to laugh at him, because, well, because I'm mean?

OTOH, it's going to be great in a novel. Yowzur.

I miss the good old days of whip wars between the drivers. I went home with a few welts, but JR went home with a few more. The ones that leave the best welts on human flesh are the ones with a little more spring to them. My red one was good for sound effects, but the blue and green ones worked really well for the welt marks.

I wonder where JR is now. Last I heard of him, he was on KBER, trying to win a date by saying that he looked like Gary Allan. (It was John Rich, you moron!!! )

Porme -- self gratification on film