For Those About To Walk, We Salute You

(Editorial note: I've learned a very important lesson about checking the expiration date on Wal-Mart Home-style Potato Salad. The lesson is this: Do it. Food poisoning is very unpleasant, and will knock you on your ass for a couple of days. That's where I've been, food poisoning land. It's not a nice place to visit and I definitely do NOT want to live there… Anyway…) 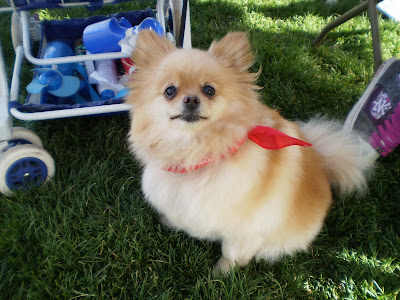 Next, a field report: Saturday dawned a bright and beautiful morning with a light breeze. Mr. Slave Driver and I awoke with a spring in our step and a song in our heart…The Kid, however was much more difficult to wake up because, although this event is her gig, the day before she had attended "The Big Ass Show" at Usana Amphitheater. This meant that from right after school at 2:50 when I picked her up until 12:30 am when she returned home, she was either talking on the phone, texting on the phone, surfing the pit or ogling guys. In other words, she had been very busy and was just plumb wore out. But…not my problem. I had specifically not worked on Friday evening because I did not want to exhibit signs of "Dragging Ass Syndrome". So we gleefully hauled her crabby butt out of bed, picked up the other teenage member of our team, along with her canine companion, Papi, and headed to Sugarhouse Park for the strut. 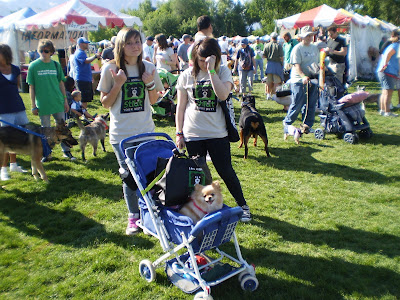 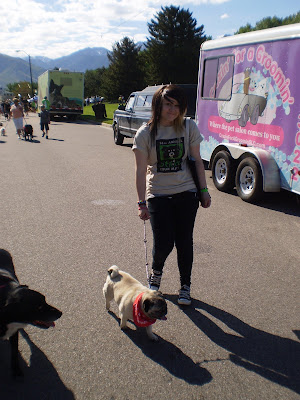 Kenna and Papi; their first Strut!

We arrived early enough to find relatively close parking on a side street, due largely to my continuous effort while still at home of rousing the troops via repeatedly stressing "Hurry up," "Let's go!" and "Come on!". We equipped our "Army of Dog" with a cooler full of water and a baby stroller I picked up for $4 at my neighbor's garage sale. Why? You ask, would someone walking their dog around a park need a stroller? Because, I say, my dog has short little legs and like me is a bit over weight so usually a block into the strut she quits on us and we have to carry the fat little fluff ball which makes my arms really tired. Also, they have a lot of stuff that the sponsors give away and we get a bit overloaded with swag. So this year I planned ahead and we rolled most of the way.

The info I've gotten back from No More Homeless Pets in Utah states that this year's strut was the most lucrative fundraiser yet, so that's great. And even thought we did not meet our goal of $500 we did a fairly respectable $415 in donations, so Yay! for us.

While we were there Mr. Slave Driver did a little dog shopping and found a completely weird breed that he now wants, but they are so obscure I seriously doubt we will ever get one which is good because it's as big as a pony but with much more hair. MUCH more. And I know from experience of having a large dog, (Kuvasok, another obscure breed big enough to saddle/ride) that large breeds mean large poops and I do not relish the thought of renting a backhoe to clean up the yard, TYVM. 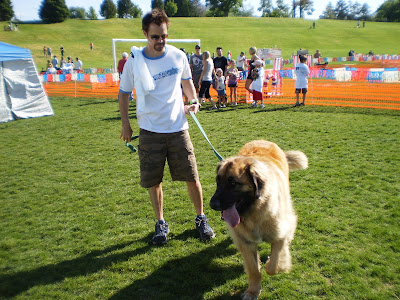 This dog is a "Leonberger". No, I've never heard of it either. But now my husband wants one. He couldn't fall in love with a Pit Bull or a black mutt, both of which are overrunning the shelters?
Anyway, here are my pictures from the 2009 Strut Your Mutt. Mr. Slave Driver, obviously a Luddite, uses an old fashioned film camera and his photos will not be ready until Saturday. 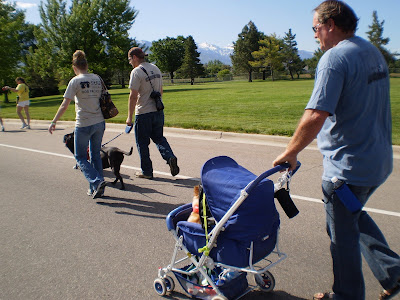 I must go now and catch up on the stuff I've neglected for the past 24 hours. Posting this blog for you, dear reader, was the first thing on my list. :) 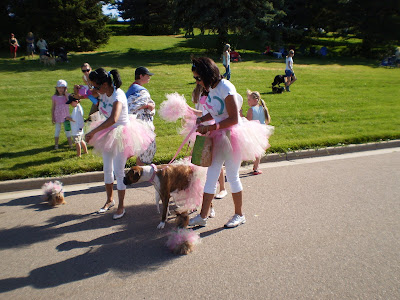 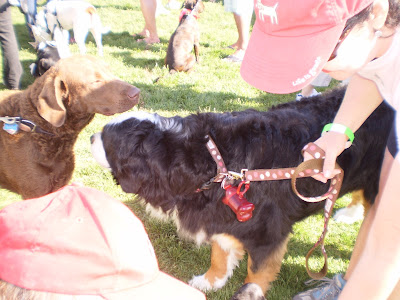 Another large breed my husband wants. This is a Bernese Mountain Dog. Because we live in the mountains. And we speak Swiss (No we don't) 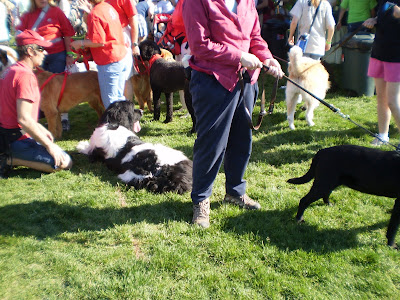 One of my favorites, a Newfoundland. Yes, they do come in something other than black. 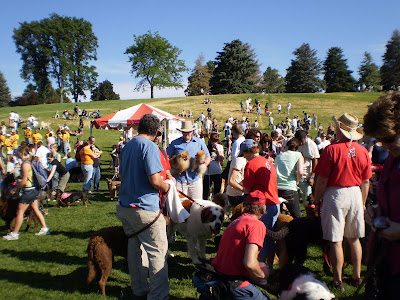 I took this picture because of the man in the middle of the crowd. The two fisted Pom holder. You have to hold your Poms up or else they get crushed. There were a lot of dogs there. 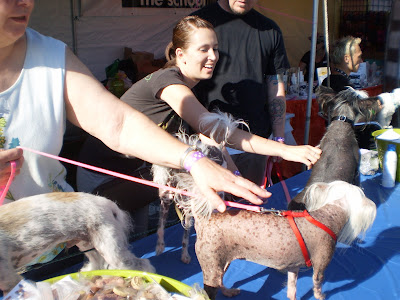 These are Hairless Chinese Cresteds, they also come in haired. This is a rescue group, and I asked "Why does this breed need a rescue? They are very expensive, and uncommon." And the girl answered "People get them as an accessorie and do not realize the care needed." Apparently, she advised, if your dog is hairless it needs to be bathed an lot or it gets acne. And you have to use sunscreen on it. So besides being fugly looking, it gets pizza-body and sunburn. Poor little designer dog...

I've talked about the "Big Fix" mobile unit that travels Utah spaying and neutering dogs and cats at a discount. Well. here it is. And what I most loved about seeing the unit is their license plate- 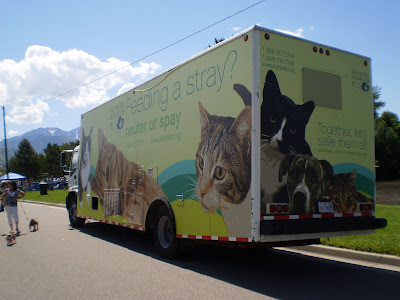 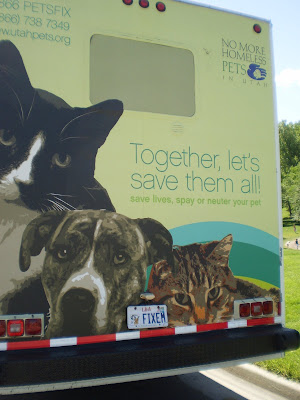 Excellent show & tell, SD. Love the fixem-mobile. Wish dentists and hairdressers came through the neighborhood in trucks. Okay, not on these streets, but could go a fair-size box van.

And I totally don't get the ugly naked dogs. Ugh! Love the great big, cuddly, sweetypies, though.

And the little bitty sweetarts.
And who else would think to bring a ride for the dog? Probably see lots of strollers next year . . . an idea whose time has come.