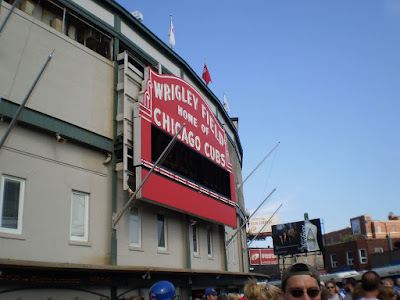 You may not know this, and it's my secret shame… I am a …Cubs fan.

Yes, yes, I know. "Why, Slave Driver," you ask, "would you want to put yourself through that heartbreak and humiliation year after year? Why would you want to subject yourself to the anticipation and excitement of a baseball season only to, at the end, have your heart violently ripped out of your ribcage, thrown down, stomped and ground into the dirt, and then jammed back into the spot it came from, all mushed up and filthy?" 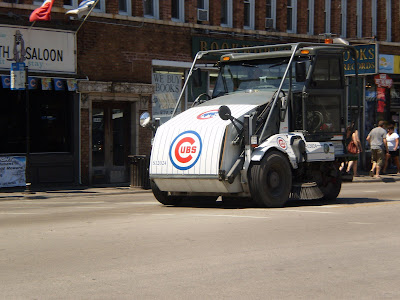 I don't know, but it's probably because 1) I've always rooted for the underdog and 2) Cubs fans are, without question, the best fans in the entire world, and 3) Wrigley Field is a beautiful place.

So while here in Chicago I decided to try and catch a game. At Cubs.com they didn't have any seats (I may be a fan but it's still me—uber-frugel SD) for less than $225.00 that were together and I was not shipping The Kid off to a section on her own (she is kind of cute and, when a person of the male gender asks her name we've begun to introduce her as "Hi, this is our daughter, Fifteen.") so my Bro, The Kid and I decided we would go head down to Wrigleyville and see what we could manifest.

When you go to a game the energy builds the closer you get to the ball park. We arrived and immediately were assaulted by scalpers. We decided to see what the official box office had to offer first and use the "ticket re-sellers" as option #2. We also know that as soon as a game starts the scalper's prices fall because if you can't unload your tickets you've wasted the money you invested in them to begin with. 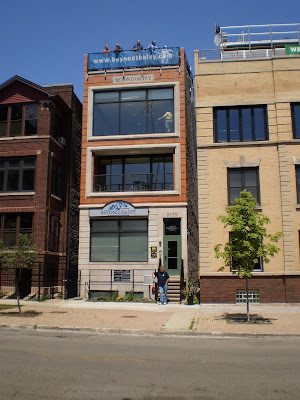 So we walked around to the back side of Wrigley— now, if you've ever caught a Cubs home game on WGN you have noted the "rooftop fans," people who sit on the rooftops of the brownstones across from the park and watch the game. These "seats" can be very pricy, and include food/beverage for upwards of $80. But you must admit, it's ingenious and lucrative. 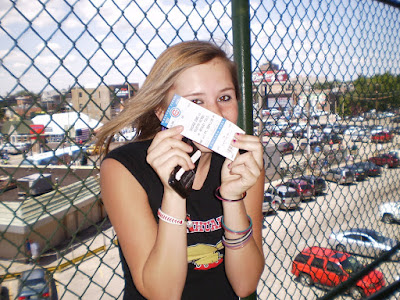 Anyway, we got in line and got Standing Room Only tickets 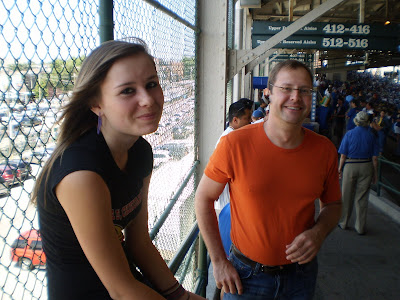 which means you get to stand along the back railing on the ramp between the mezzanine level and the upper deck. 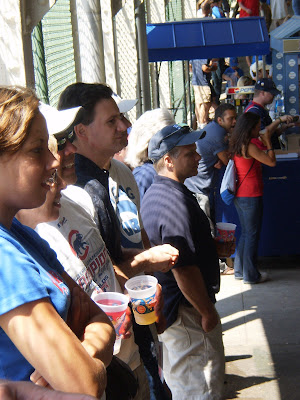 The view was great 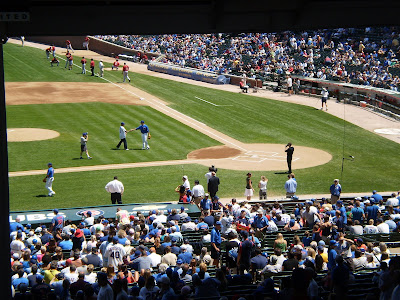 and the price fantastic— only $15 each, which was a bargain compared to the bleacher seats at $36, and yes we did have to stand the entire time but it was okay. 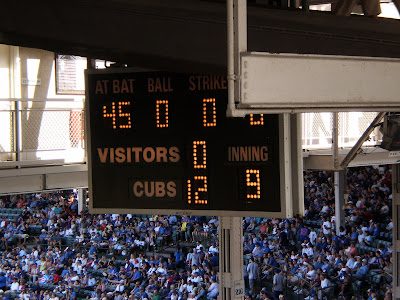 And I got to see a game and guess what… 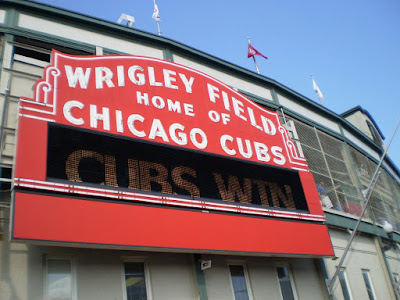 Wow, SD, you should travel more often--the blog is so busy and so well decorated this past week. I can't read scoreboards (I'm good with the Dow), so--did the Cubs win? Wait, I'll ask Mr. Ddusty to splain it to me.

Okay, MMr. DDusty deciphered the scoreboard and tells me the Cubs won 12-0 and that the 45 is the batter's shirt number. Now he's yammering about the seventh inning, which I had always thought was a novel by Evelyn Waugh.

adwor: shirts with out-of-fashion designers names on them.

We sang "Take me out to the ball game" during the 7th inning stretch, but when they win we sing "Go, Cubs, Go" by the late great Steve Goodman who also wrote "A dying Cubs fans last request" which is a pretty funny song.