Jim, You Really Should Be Flossing...

Last weekend Nat showed me that Jim was a little foamy. I didn't think much of it; I don't ever drive Jim. I give a lot of historic tours where my attention ratio is divided in a 70/30 split between customer/horse. What that boils down to is this; I like my horses like I like my men; laid back, self sufficient, and willing to turn their paycheck over to me every week.

Jim? Not so much. He's a feisty little guy, and he takes a lot of work to drive. I think I've told you, I'm way to lazy for that shit.

Cletus= fabuloso, could do the job all by his onesies if he had 1) thumbs and 2) spoke English.

Tony too, except for his need for constant affirmation;

"Good boy, Tony! I knew you could do it! It's not every day a kitten hisses at a horse and the horse survives… and I know those leaves that rustled when you walked by were hiding a grizzly bear."

Charlie is pretty level also, except for the occasional and totally random "explosion."

Anyway, back to Jim. Jim's slobber was foamy. Then Monday night MBA went to give him kisses and she said his breath was stinky. So of course, what do horse people do?

Immediately Ro & I went over to Jim and smelled his breath. And yeah, it was nasty.

So Thursday I met Ro over at the clinic and Jim went to see the horse dentist.

Now, for you non horse people, and for you newbie horse people who have never had the pleasure of the horse dental experience, I've taken some pictures for you.

First, we had to convince Jim to get into the stocks.

Jim is not too sure about the whole "stocks" thing. 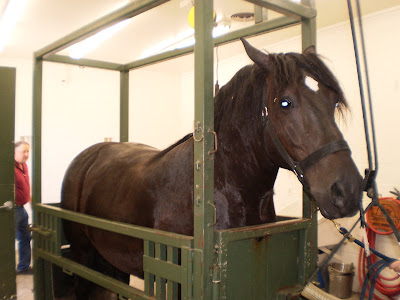 He JUST fit. Jim is half Percheron, half Morgan. It's a good thing we didn't have to bring Wesson out for a dental appointment. 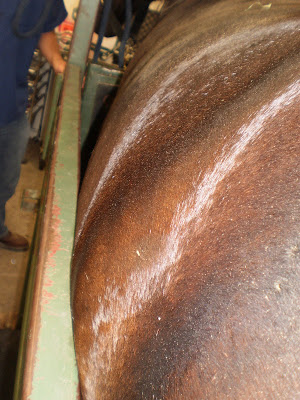 "Hey, ladies, does this make my butt look big?" 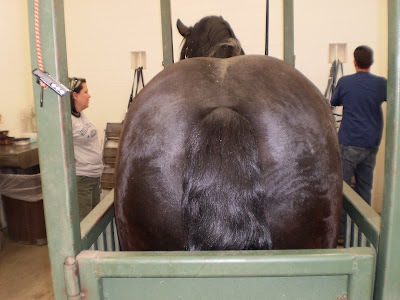 Then the Vet gave him a shot of lala juice and soon the meds kicked in and Jim was Mr. Mellow. 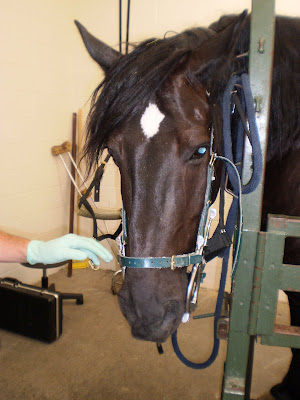 Then they put him in the device. It's like…well, never mind. It's like a, well, no, that's not it either… it's like… well, here is what it is, you decide what it's like: 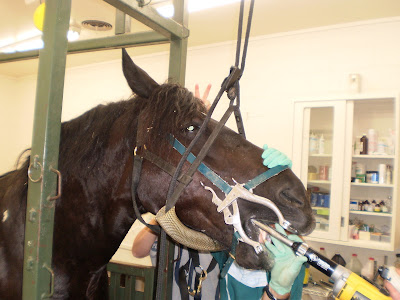 And found that Jim had a tooth that started out growing south and took a U-Turn. 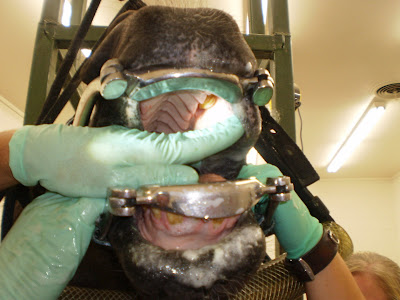 So they had to use this thing which is usually not used for this purpose (and no, you do not want to know what it's actual purpose is…) to get in there and saw his wrong-way tooth into submission.

Because they don't make orthodontic braces for horses.

Although Jim would probably like a very blingity bling Grill. 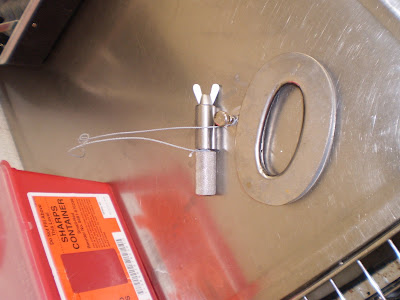 So here is Jim's tooth, or part of it. 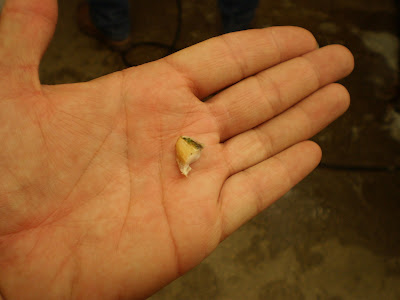 He was kind of a baby about the whole thing. 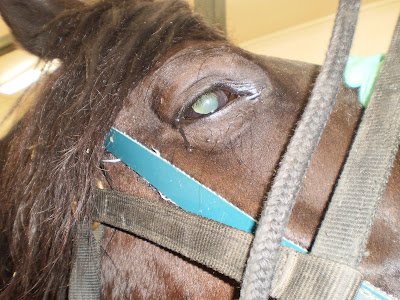 But he'll get some time off and be good as new real soon.

We put the piece of tooth under some shavings in his pen. We told him the Tooth Fairy would give him an Apple for it.

Now I gotta bring a damn apple into work tomorrow. I thought I was done with this crap when my kid turned 12...
Posted by Lisa Deon at 8:01 PM

Poor Jimmie. I love that horse. It's really hard to believe how tiny he seemed when we first got him. Belle adopted the four brothers when they were tiny and later would call out to them on the street (ok, Bill never made it out to the street, but she loved pushing them around in the corral). I loved driving him as a team, first with Charlie, then with Bob. He is the level-headed team member (at least with Bob) He is the one that kept Bob from killing anyone the day that the fireworks went off right in front of them going into the grove. Imagine a cat, on a leash, with a hose spraying them. That is what Bob looked like -- total flipping out -- Jimmie just drug his butt around, in a fairly straight line, until Bob could calm down. That is what I love about teams.

Last week, twice a civilian asked if Jim was a Friesian. At the Vet Clinic a real Friesian showed up, which made chunky monkey Jim looks like a sows ear compared to the silk purse Friesian. On the other hand, if we tried to work the Friesian like Jim, the Friesian would snap in half like a twig.

In a contest of substance vs. beauty, I'll take substance every time.

Mostly because I will never win the beauty contest either.

Jim does have a nice wavy tail. Hope he is feeling (and smelling) better now. I've never had a tooth sawed off. Why did they not pull the tooth? And does this have anything to do with looking a gift horse in the mouth? Don't even want to discuss sow's ears. Yuuckhh!

Oh, poor Jim! But what a fascinating look at a process I'd never even thought about. And very funny.

So are horse teeth vastly different from human teeth? Because I'd think sawing a human tooth like that would expose the nerve and cause Big Problems. Or did they then seal it somehow?

My grandma was once postmistress in a small town in northern MN and delivered the mail via horse-drawn buggy. I seem to remember it was a Morgan.

hodog: what Jim said to the stray dog

Horses teeth are complex, which is why you can wikipedia it if you are really interested, but essentially...

Consider that they grind off sharp hooks and spurs, so no, nothing need be done to the sawed off tooth because their teeth keep growing.

The fun part is watching them while sedated...Ro's horse took a double does because he's an @sshole and was loopy for a loooong time.

And the reason for the "Never look a gift horse in the mouth" quote is because you tell their age by the angle of their teeth. More upright and straight, young; More horizontal, older. There are a number of criteria used to determine age via dental observation.

Well you just done went and posted pictorial evidence that proves that carriage horses DO get whatever medical care they need! Awesome!
LOL, of course I'm not the least bit surprised. I know you guys take good care of them.

He seemed way happy thursday night when I was putting Bart to bed, so it sure didnt take long for him to feel better.
Sure glad we have such attentive people at the barn, makes things very nice for horses, and people...