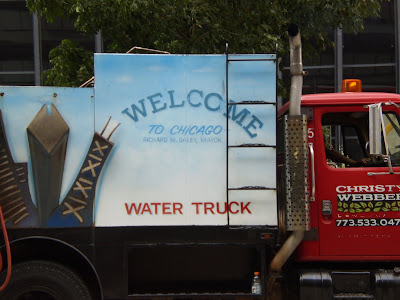 Our "official" Chicago welcome.
There is something about the smell of a riding stable that's good for the soul. It's not a barn smell; it's not an exclusively animal smell, either. It's a combination of the horses, hay, leather, and the excitement oozing from the pores of young girls who are enamored with horseback riding.

Sally and I met when I moved my horse from the stable where the girl who had been my trainer was flaking on me. She quit her job, left her husband, and moved in with a guy who was twice her age, had a 13 year old child, and, oh, yes, was married. I don't know what became of them because I got out of that cluster f*ck before I got any more late night "Have you seen my wife I miss her so much," calls than I'd already received. The last I heard the man, Ralph, who transported horses for a living, changed his name to Rafee (pronounced Raw-fay, with a little accent thingy over the "e" on the end) and was touting himself as a high end trainer of Arabians, Saddlebreds, and National Show Horses, which is a breed that combines the two. In other words, horses who do a lot of crack. Or at least act like they do.

Sally was the in-house trainer at the barn we moved Dreamer to. We were hoping that the change of venue would give him a more grounded environment since the last place had run amok. Plus it was much closer to home.
Sal and I hit it off right away. She took me under her wing and taught me more about horses in three years than I learned in the previous thirty. When I had my kid, we joked about me sending her to live with Sally when she was 13. And when she was 13, that's exactly what I did, for two weeks. Now, this is where the BHS comes in. Like other people who decide what they want to do for a living and go to school to get a degree, Sally wanted to be a trainer so she spent a year in England being schooled in hippology at the British Horse Society. She is knowledgeable in all aspects of riding, from Polo to Dressage, from Western to Eventing.

Anyway, we spent the first three days of our vacation at Whispering Oaks Farm under Sally's tutelage, and in between we ate, and went out and ate, and of course ate some more. Sometimes we went out to eat. But mostly we ate. ( It's a Chicagoan/food thing. You wouldn’t understand unless you'd lived there and then moved away, like we did.) 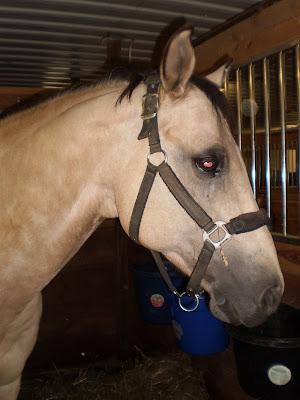 This horse is named "Baby" and I have known him for 17 years.

It had been so long since I was at a riding stable that I had forgotten so much of the protocol; to shout "Door" before you enter so as not to spook someone riding by. To announce your intention of passing another rider, always on the inside (never on the rail). In other words, common equine courtesy. And breeches. The Kid and I wore breeches there every day, which in the non horse world makes you look freakish. The riding stable world has a culture all it's own. 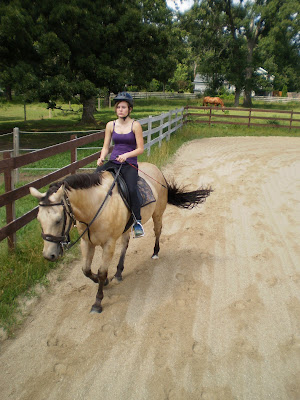 the Kid got to ride a lot, and we got to ride together which never happens because at home we only have one horse. 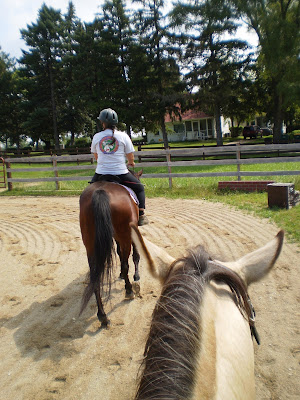 So you will be hearing more about Sally Thompson-Smith, because she is going to start blogging once a week or so on the subject of horses, and mostly it will be short and a lot of tips and tricks. But if you are a horse person, you need to pay attention, because Sally really knows her stuff.

'Cuz she's got the whole BHS thing going on. And she's a freakin' genius when it comes to horses.
Posted by Lisa Deon at 10:53 AM

Excellent Pictures, SD. Hope you don't starve while you're up there in the frozen Northland. :) Glad you found a safe haven for dreamer after the flakeage.

And a nice mother-daughter horseback ride is waaay better than inter-generational shoe shopping.

Glad to hear you're having a good time re-connecting with old friends -- human and equine.

Happy, too, to hear you're not AT ALL worried about fitting into the airplane seat on the return trip... [evil grin]

exendog: not sure exactly, but I hear they serve them at Cubs games

A tragic thing happened right before we arrived Tuesday am. Sally's nephew fell from a 3rd story window and hit the ground face/head first. They took him off life support and he passed Sunday am. 26 years old, a tragic and premature end to a life so full of promise. Needless to say the mood around here has been a somber one. I have changed our schedule so we go visit my younger brother who lives in downtown Chicago this week and we return to see Sal right before we come home.

Breeches are the pants you wear when you ride English. You know, tight fitting with a lot of lycra in them so on someone rolly poly like me they show all the bulges.

And BCB, who said I fit into the seats to begin with? (actually I budgeted a 10 pound gain along with my finances...)

I'm so sorry to hear of your friend's tragedy. 26 is far too young.